Summer holidays on the Seiser Alm: hike, wellness and bike

Summer in the Dolomites are simply great: the peace, the scent of hay, the fantastic view of the Schlern and the sun. The Seiser Alm is a jewel for pleasure seekers and those who love the quietness. 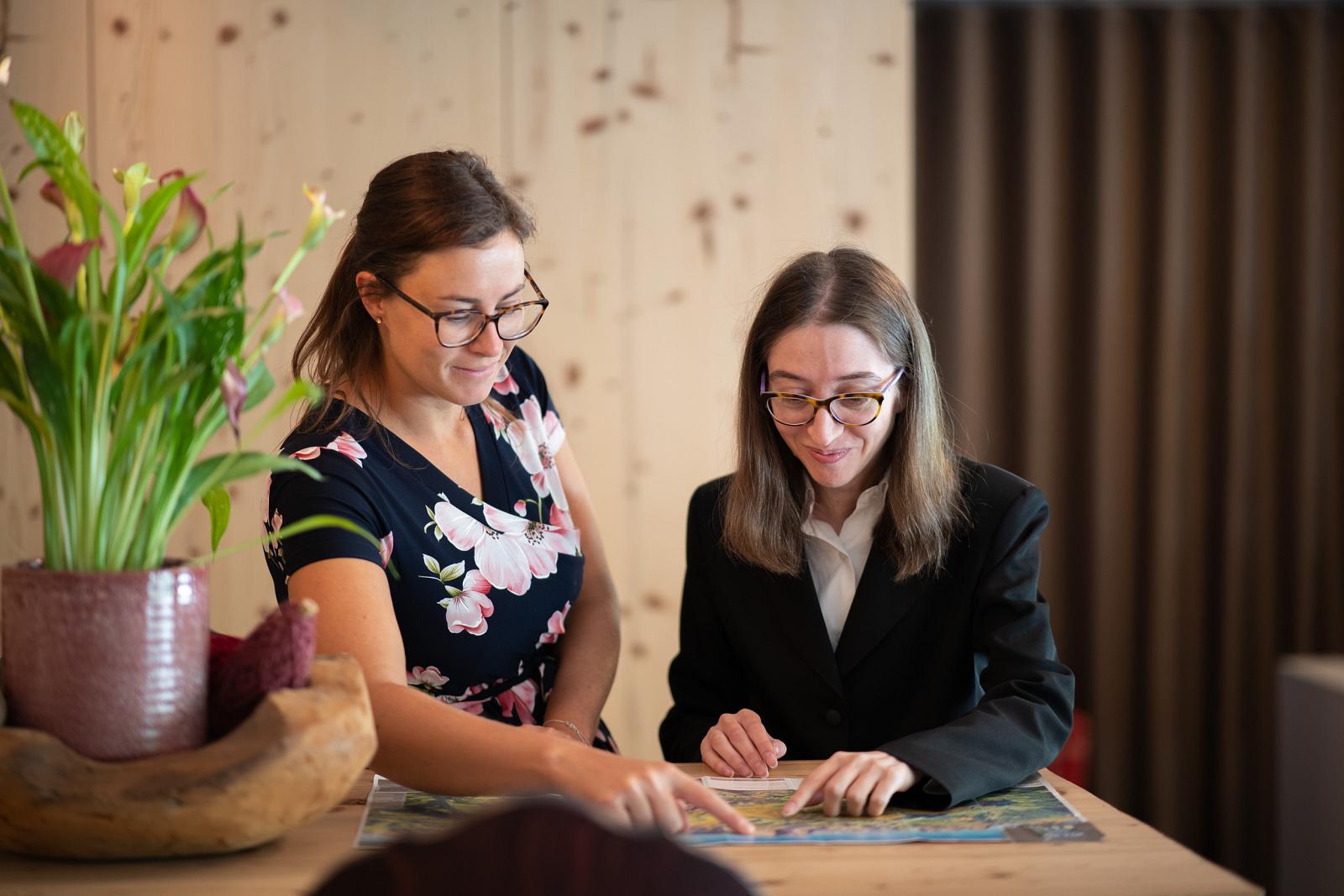 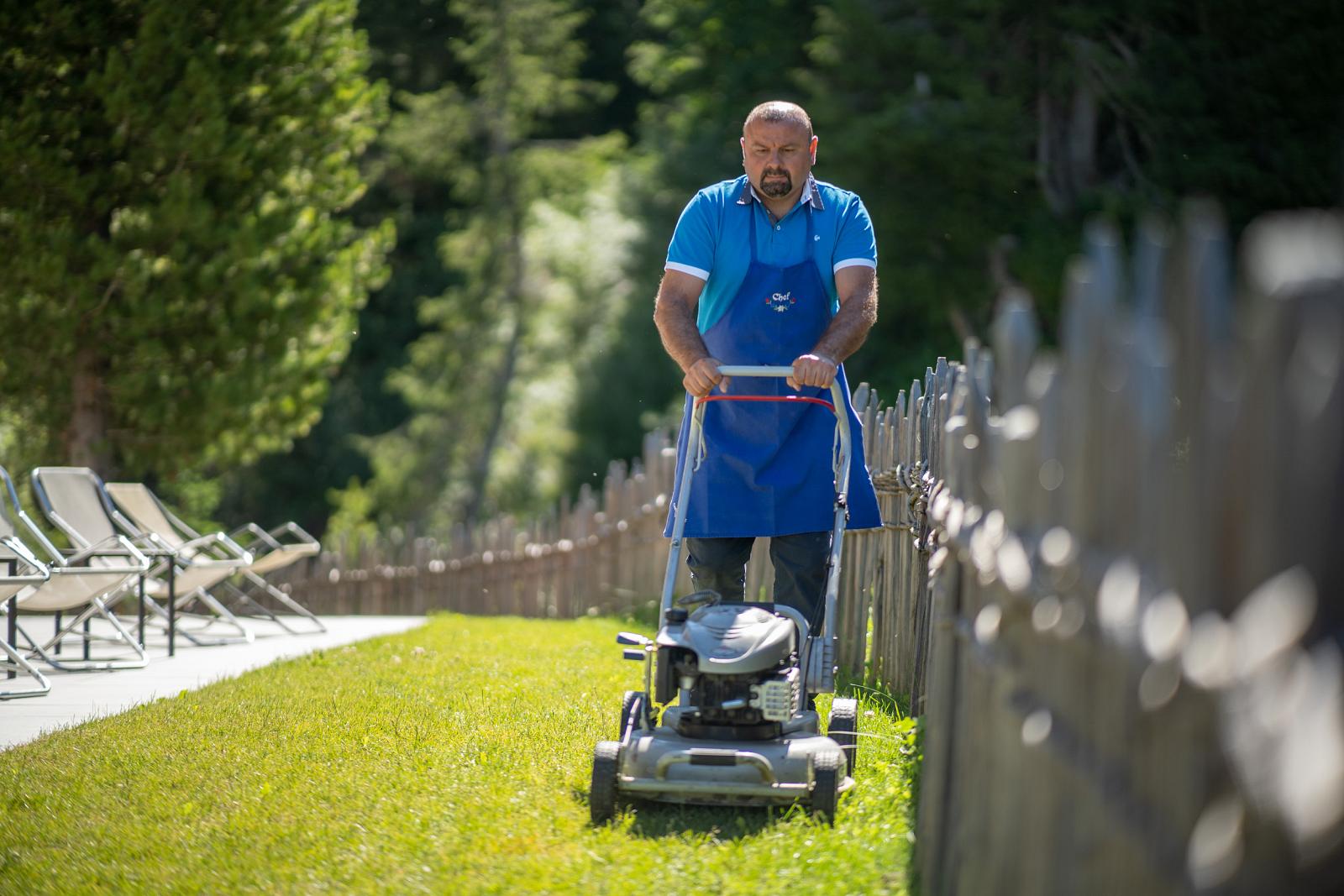 Hotel Seelaus is located in Alpe di Siusi holiday area. Thanks to its strategic position, the hikes start directly from the hotel.

The Hans and Paula Steger Trail is one of the projects of the foundation, which is intended to show hikers the beauty of the Alpe di Siusi. It is an easy hiking trail leading from Comptasch to Saltria without any difficult sections or steep ascents. Starting from the church in Comptasch, we follow the trail no. 30, to the Hotel Steger-Dellai and leads through a forest up to a small hill with a spectacular view of Langkofel and Plattkofel. Then the trail leads across lush alpine meadows until Saltria.

This 4.5 km long trail can be gone in a bit more than one hour (one way). If you don’t want to hike back, just take the bus from Saltria to Comptasch. The Hans and Paula Steger Trail offers spectacular views of the beautiful landscape of the Seiser Alm, its flora and fauna, and of the surrounding Dolomites. It is this unique nature that Hans Steger and Paula Wiesinger wanted to protect. 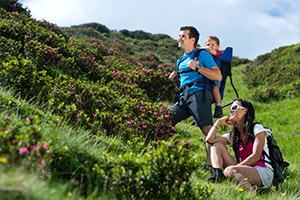 Take the Trail from the Hotel to Compatsch, about 5 minutes. To your left, a wide path leads steeply uphill towards Puflatsch. If you prefer, you can save yourself this gain and take the Telemix Puflatsch up.

From here, walk on to the Engelsrast (“Angels’ Rest”) viewing platform and enjoy the view of the surrounding peaks together with the angel who is resting there. The loop route leads on to the Filln Cross and the Witches’ Benches: according to legend, witches used to dance here and even today you can see the stone benches with their backrests! The path now leads down to the Goller Cross and, with a view of the mount Schlern in sight, back to Compatsch, the set-off point of the tour. The witches of the Sciliar have chosen a spectacular meeting place. It is said, in fact, that they would meet on the borders of the Mount Bullaccia plateau to then loudly fly over the Siusi Alps to the Sciliar. They would sit on the witches’ benches (Hexenbänke), blocks of porphyry rock that resemble seats, to admire the panorama. During the challenging climb to the panoramic point, some may wish they had the same powers of flight, but the splendid view is worth the effort.

The trail begins at the station at the top of the Marinzen chairlift. For those wishing to take the chair-lift route by foot, the lower station can be reached by taking path n. 4 from the car park, which crosses the meadows to the upper station of a ski-lift. From there, the trail continues along a lane to the left for 300 m, until the beginning of a second path to the right (marked 4A). This path winds along bends and ski runs, following the path of a chairlift and climbing the wooded slope until it joins trail 11A. Keeping to the left, the trail leads to the plateau where the Marinzen-Marinzenhütte chalet is located. To the east of the upper station, a forest road leads off to the sheep’s hut “Schafstall” and towards Mount Bullaccia “Puflatsch” (marked 9). The forest road is almost level and leads to a small clearing with a hut for the sheep. From the hut, the trail leads up the wooded slopes of Mount Bullaccia, becoming fairly steep. Passing the hut, the trail follows the sign “Puflatsch” (Mount Bullaccia) to the right along the fence (marked 8) and then leads into the forest. Climbing rapidly, it reaches the Tschonadui chalet (closed) to the north. Now the trail offers a respite. Slightly more level, it takes a wide arch to the right, before climbing steeply towards the plateau. At this point the trail meets the path for Mount Bullaccia (Puflatsch), leading just a few minutes later to the Arnica lodge on the left, offering refreshments. From the lodge, a path leads north to the Goller Kreuz panoramic point, where a wooden cross has been erected, and then skirts the plateau to the Witches’ Benches. A few metres further on is the highest peak of Mount Bullaccia.

To descend, follow the same route to the sheep's hut. There, the trail continues along a descending gravel path, which begins below the hut, and 10 minutes later it leads left along a path through the forest towards “Castelrotto-Kastelruth” (marked 8), ignoring the paths leading off in other directions.

After about 5 minutes in the forest, the Witches’ Seats are found to the right, two rock seats created by magic. The climb continues towards a footpath offering a short-cut. The trail leads down to the sports field, where the Wasserebene restaurant is located. There, keeping to the left, the trail crosses Tiosels and continues to Castelrotto. From Compatsch we take the bus to Saltria and there the chairlift Florian. From the Williams mountain hut at the mountain station of the chairlift, we follow trail no. 9A towards the Marmotta mountain hut and continue on trail no. 527, which leads us towards north at the foot of Plattkofel. From the Piz da Uridl hill we hike downwards to the upper boarder of the Plan de Cunfin area.

At the fork under the Vicenza mountain hut, which is located in a valley between Mt Sassolungo (3,181 m asl) and Plattkofel, we follow trail no. 526 in the direction of the Comici mountain hut. Climbing the steps up to the Ciaulong saddle, we enjoy a breathtaking view of the Seiser Alm, a part of the Val Gardena and the Puez-Odle Group.

At the foot of Plattkofel we follow trails no. 526 and 526A, passing Col de Mesdi and Sass Fendu, where we branch off to no. 528. It leads us along the Ampezzan stream down to Monte Pana, a highplateau at approx. 1,700 m asl. From there, we take trail no. 30 to hike back to Saltria. 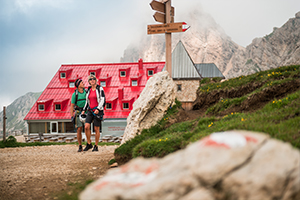 From the Hotel to Compatsch, on your right take the train Nr. 7 to Panorama, that leads through the Alpine meadows of the Alpe di Siusi to the foot of the Rosszähne mountains before snaking upwards to the pass of the Rosszahnscharte. Below the Rosszähne, the path leads on to our first destination, the Tierser Alpl mountain hut.

The walk then takes us below the Roterdspitze peaks, at first slightly downhill and after just a few steps, up a fairly steep slope to the high plateau. And now it’s just an easy walk to the Schlern. Good walkers in peak physical condition can opt to head up the Petz. This is the highest point of the Schlern, where you will find sweeping views from the Seiser Alm over to the Langkofel, Plattkofel and the nearby Rosengarten.

The route back is along the trail no. 1 which leads downhill over the north slopes of the Schlern.